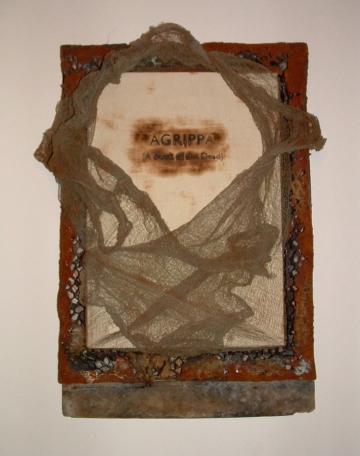 In 1992 the poet William Gibson joined with the publisher Kevin Begos and artist Dennis Ashbaugh to subvert the idea of the artist’s book, and with it the principles of institutional preservation, bibliophilia, connoisseurship, rarity, value and the durability of text.

They contrived to produce Agrippa: a Book of the Dead, a semi-autobiographical poem enshrined in physical and digital formats, each programmed to self-destruct.  The body text of the deluxe version of the book, slyly arranged after the format of the Gutenberg Bible but reproducing the genetic code of the fruit fly, was interleaved with images designed to fade or slide from the page on use.  The text of the poem itself was contained in a floppy disc housed in the binding and designed to self-encrypt on use in a Mac.

Just like the pesky fruit fly, the book survived and the experiment failed: at a launch event an audience member surreptitiously filmed the scrolling, self-immolating text (still reproducing wildly on the internet) and private and institutional collectors pursued the book as a trophy particularly worthy of preservation.

Agrippa has been the subject of much institutional study and has been a focus of attention for scholars advancing investigations into the relationship between digital and analogue text, such as Matt Kirschenbaum.  But it remains an object of considerable mystery, with uncertainty still persisting around the number of editions produced, (deluxe and regular), survival rate, the extent to which the fading technology was applied and the means by which the book was conceived and marketed.

In perhaps a final admission of defeat, Kevin Begos donated his Agrippa archive to the Bodleian library in 2011.  This includes examples of the two editions, prototypes of the fading technology, materials used for the production of images and a wealth of correspondence and ephemeral material.

The archive is probably the single most important source for the understanding of this provocative anti-book and offers an important opportunity to investigate the text and its contexts, questions of curation and conservation, the position of the private and institutional collector in the preservation of such texts, the interface of digital and analogue texts and the wider genre of books seeking to undermine the codicological and typographical certainties of their own existence.  We eagerly await the arrival of an edition of Fahrenheit 451 whose text can only be read when exposed to flame and therefore a book that can never be read in the Bodleian.

Agrippa would provide a powerful launch pad into related areas – the role of the artist’s book in defending or questioning the nature of the book, questions of digital obsolescence and endurance (the Library of Congress has recently abandoned its attempt to collect all of Twitter, while the Bodleian builds its Web Archive) and the interplay between analogue and digital. In addition to participating fully in its academic programming and public engagement, the student would be encouraged to spend time behind the scenes at the Bodleian, understanding how the institutional contexts of the texts it holds can add to their understanding and perhaps contributing ideas to help develop the collections.