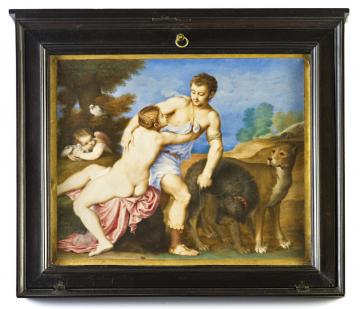 Venus and Adonis, by Peter Oliver, after Titian, signed, inscribed and dated 1631.

The rise of the portrait miniature (or, limning) in Elizabethan and Jacobean England is well charted, and the careers of its two main protagonists—Nicholas Hilliard and Isaac Oliver—have been thoroughly studied. By contrast, the life and works of their most important successor, Peter Oliver (Isaac Oliver’s son), is poorly understood. Trained by his father, Peter Oliver brought the miniature to new heights as an art form, transforming it from a vehicle for portraiture to an important expression of the most prestigious early modern genre: history painting. Peter Oliver’s works were avidly collected—he received a pension from Charles I, who spent huge sums on his miniaturisations of Italian and Flemish old master paintings in the Royal Collection. Peter Oliver seems to have moved in elite intellectual circles, encountering figures such as the Royal Physician and friend of Rubens, Theodore Turquet de Mayerne, who collected recipes on limning techniques. Peter Oliver likely trained the next generation of miniature painters, who ushered in a “new” manner of limning and paved the way for the dramatic expansion of the profession in the eighteenth century.  An innovative draughtsman and an ambitious inventor of pictorial narrative, Peter Oliver was a prolific artist whose works are scattered across public and private collections across the UK.  Yet despite his importance, there is no catalogue raisonée of his oeuvre, attributions of his miniatures are uncertain, his technique is poorly understood, and his drawings—much prized by early modern connoisseurs—have barely been studied.

The PhD project aims, for the first time, to study Peter Oliver in detail and in context. It has three main components:

The latter part will seek to situate Oliver within the burgeoning culture of connoisseurship at the Caroline court, the intellectual milieu of the early Stuart period, and the socio-professional networks of artisans in early modern London (including the émigrés, which included Peter’s father, Isaac). Partnering with the National Portrait Gallery offers an exceptional opportunity, providing unrivalled access to one of the most important collections of relevant objects and the input of one of the world’s leading curatorial experts on the subject. This will be combined with Marr’s knowledge of the subject, the holdings of the Fitzwilliam Museum (which includes many works by Peter and Isaac Oliver), and the technical expertise of the HKI (which is currently engaged on a study of English Renaissance miniature techniques). MacLeod’s professional contacts will also facilitate access to objects in other collections (e.g. the Royal Collection, Chatsworth, and private collections). The project holds out the promise not only of bringing to light a major yet understudied figure of seventeenth-century English art, but also of revealing the “missing link” between Renaissance and Enlightenment developments in the miniature as art form. Only through a collaboration between museum, academic, and conservation professionals can such a project succeed.