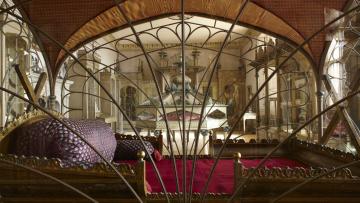 The forthcoming 75th anniversary of the Partition of India in 2022 has presented a much-needed opportunity to focus on Powis Castle’s Clive Collection, carry out new research to better understand its origins and meanings historically and in the present, to open up its untold stories and to building new partnerships with global stakeholders to support its future display and care.

By examining the broad theme of Legacies of Colonialism, we will seek to link Powis’ stories with those of other NT places with related histories, such as Kedleston, Osterley and Basildon. as well as building on existing partnerships with the V&A (which holds a substantial south Asian collection), Birmingham and Leicester Universities and the National Library of Wales, (which holds the Clive archive), and to seek new relationships both at home and beyond our shores.

Most importantly, the project seeks to set the Clive Collection on a new path to find its place in the context of international collections long-term, to use it as a portal to conversations with its source communities, as well as the diaspora of cultural objects displaced from their places of origin by colonial activity and conflict.

The Clive Collection is one of the most important collections of Indian artefacts, other than that held by the Victoria & Albert Museum, outside of India. The collection contains over 1000 objects, and is the result of the activities of Robert Clive, 1st Lord Clive of Plassey (1725-1774); his son, Edward Clive, 2nd Lord Clive and 1st Earl of Powis of the 3rd Creation (1754 - 1839) and his daughter-in-law Henrietta Clive (née Herbert) (1758-1830). The collection has been at Powis Castle since the early nineteenth century.

The collection powerfully illustrates the connections between colonial activities and the acquisition of high-status textiles and decorative art. The Clive Collection at Powis Castle includes Tipu Sultan’s tent and a tiger’s head finial set with rubies, diamonds and emeralds from his throne; both of which were acquired by the Clive family after widespread looting and plunder of Tipu’s palace after his death during the siege of Srirangapatam. This project will not shy away from evidence of colonial violence, will seek to understand the personal and transactional relationships represented by the objects in the collection and will respond to recent museological and interpretative movements towards decolonisation in museums and presenting ‘colonial collections’ in an honest, inclusive and scholarly manner.

The studentship will be based at the University of Cambridge Department of Archaeology, affiliated to the Cambridge Heritage Research Centre, and supervised by Dr Mark Elliott, a Senior Curator at the Museum of Archaeology and Anthropology. An actively interdisciplinary environment enables productive links to institutions and groups such as the University of Cambridge Museums and the Centre of South Asian Studies.

The project will re-examine the significance of the Clive Collection within the global context, looking at how it was collected, what it represents in its entirety, and the cultural significance of the objects it contains; and how it is best displayed to encourage and support dialogue around its long-term future. Research questions may include: