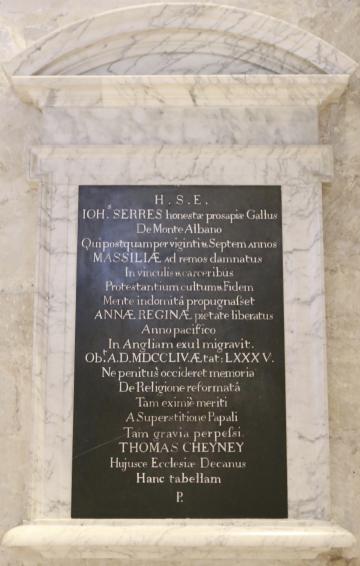 After the revocation of the Edict of Nantes in 1685, French protestants were in limbo. Many of them fled overseas. A large number flocked to the British Isles over the following years and in 1709 Queen Anne granted all refugees citizenship. Whilst their economic role has been studied, the private writings of the Huguenots (as the protestant refugees were known) have not received the attention they merit. There is a wealth of documentation (most of it in French, but some of it in English) much of it held in public archives and libraries, some still in private hands, made up in particular of correspondence between Huguenots in Britain and their friends and family in France or elsewhere.

The planned doctoral thesis will look at the ways in which members of the Huguenot diaspora who settled in Britain dealt in their own words with what was all too often an involuntary departure from their homeland, France. Whilst the professional success and rapid integration of many Huguenots who were often skilled manufacturers—the quiet conquest as it has been called—has been celebrated, the question of their personal vision of their experience of exile and integration, as individuals, but also as members of a minority, in the British Isles, has often either been downplayed or not been considered at all. This is regrettable per se, but also because the protestant tradition of self-exploration means that the Huguenots have left some of the rare autobiographical accounts we have in French for the period (e.g. Jacques Fontaine of Barnstaple’s diary, published posthumously in translation in 1838 as Memoirs of a French Refugee Family). Clearly these documents are worth exploring.

As many Huguenots, including the Occitan Henry Portal, settled in the county, Hampshire Record Office, in Winchester, has particularly rich holdings. These include personal testimonies like Louis Ouvry’s account in French of his early life and travels (he arrived in Hampshire in 1707, joined the British army and was buried at Bethnal Green in 1771) and his correspondence with his family (4M52), or Elizabeth St Dalham’s will (1731A/120) in which she indicates that she is not familiar with the laws of England, to use two different cases and types of source material. By working on these and other ego-documents (some of which are in the Huguenot library in London), the thesis will study the experience and narration of exile, the use of language, questions of customs and adaptation, memory and identity. The fact that women are more present in personal documents than in many official ones at the time means that it will be possible to look at the role played by gender in reactions to enforced emigration.

Though it is based in large measure on historical documents, this is an exciting and timely project as it is a way of taking the long view of the integration of a persecuted foreign minority which took refuge in Great-Britain in challenging times—the English word ‘refugee’ comes from the Huguenots who arrived in the early-modern period.

Hampshire Record Office has important holdings of materials relating to French Huguenot refugees. As part of the project, access would be provided to the archives. The student would gain experience in skills like document handling and cataloguing. S/he would be expected, within the framework of the partnership, to contribute to the Record Office’s blog and to set up a virtual exhibition relating to the Huguenot holdings at the centre of his/her thesis. S/he would also have the opportunity of taking part in (and indeed setting up) outreach events based on the skills and knowledge acquired with the staff and volunteers at the Record Office.

The doctoral student will be supervised by Professor Catriona Seth, at the University of Oxford, who has published widely on the long 18th-century in France. At Hampshire Record Office, the student will be given access to any documents useful for the thesis and given workspace in which to study them. S/he will acquire skills in document handling and cataloguing archives under the supervision of County Archivist Caroline Edwards and Principal Archivist (Records and Research) Sarah Lewin. S/he will be given the opportunity to learn about working with a range of audiences, including volunteers.